I visited the restoration of Fairey Barracuda DP872 at the Fleet Air Arm Museum last week, and saw the significant progress since I was there in July 2017.

It’s fair to say that the Barracuda does not look much like an aeroplane yet. This is a good sign. The restoration is proceeding, and has done a huge amount of work in the year and a half since I’ve been there, but most of it is on the aircraft’s internal structure, not too much of which will be visible when the restoration is completed. Nevertheless, it’s great to see the sheer attention to detail of the mainly-volunteer crew that is working on it, under project leader William Gibbs and the National Museum of the RN’s curator of aircraft, Dave Morris. Where it is at all possible to use an original piece of DP872, this will be painstakingly stripped, cleaned, straightened and re-incorporated into the aircraft. Where this is simply not possible, due to the condition of the item or if it’s missing, a component from one of the other Barracuda wrecks, or a new-old stock item in the rare cases they have turned up, might be used. Where no existing component that can possibly be restored to use is available, a new section will be manufactured to the precise specifications of the original.

A good place to see this approach is on the forward fuselage, which is an immensely complicated (some might say over-complicated) structure made up of steel tubes of different sizes, gauges and tapers, attached with specific tube-end fittings or gusset plates that are bolted or riveted together. In certain cases the tubes might no longer be useable (it’s worth saying here that tubes in a seemingly poor state, e.g. cracked or bent, have been successfully returned to something like their former condition) but the end fittings will be. This section of the aircraft is the focal point of the main efforts so far, but is by no means the only area where work is ongoing. One of the massive undercarriage units has been successfully reconstructed and has reached the stage of being primed. It more or less only needs to be painted and have the gear leg fairings fitted for it to be finished. 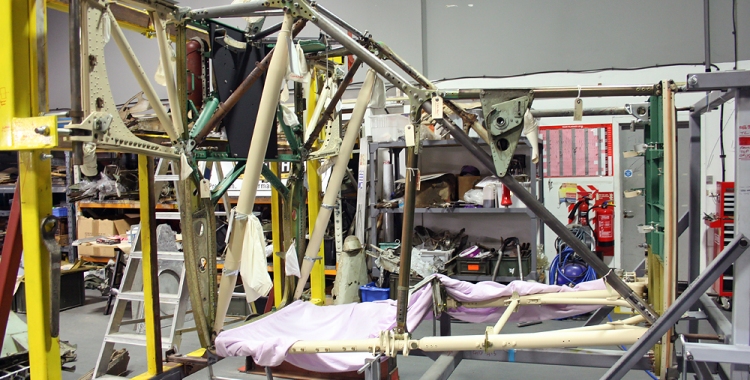 The Barracuda’s forward fuselage in December 2018. The buff coloured primer is authentic to Boulton-Paul built aircraft 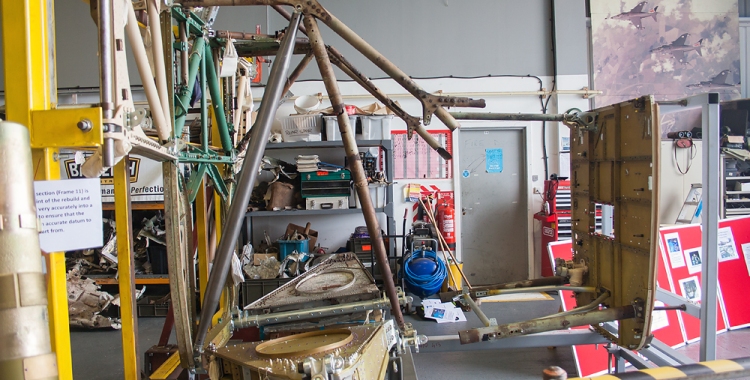 And how it looked in July 2017. Note the extent of restored tubes since then, and the additional work on the firewall

And the availability of components in good condition is actually increasing, slowly but steadily. Effectively brand-new or little-used original Barracuda items have been turning up when least expected. A museum on the Isle of Man recently furnished the project with two full wheel and tyre units, with inner tubes still holding air. Text identifying the wheels as having been issued to RNAS Ronaldsway can be made out on the tyre.

The tailwheel unit has also been rebuilt, incorporating a great deal of original material.

Even more recently, a cockpit canopy windscreen unit appeared on social media, where after a surprised Barracuda team spotted it, it was made available to them. This item was never installed in a Barracuda, which can be discerned from the lack of holes drilled in the base where it would have been fitted to the fuselage. The glazing is intact and clear, and even the rubber seals are present and pliable.

The remarkable recent find of a never-used Barracuda windscreen

This project is in for the long haul, and it’s not as though we’re going to see a fully rebuilt Barra any time soon – but that’s exactly as it should be, because when DP872 re-appears, all those years after crashing into a Northern Irish bog, she will be highly original and authentic. The real deal. Moreover, the restoration project is telling the museum a huge amount about the Barracuda that had been lost in the mists of time. It’s archaeology as much as restoration. I’m excited to see the next steps.

To see weekly updates of the restoration, go to the team’s Facebook page, at facebook.com/FaireyBarracudaRestoration, and please consider liking/following

One response to “Fairey Barracuda progress”