It’s worth saying more about the Barracuda ‘bits’ that will make up this project, as much of the material gathered has only rarely been seen by the public – and probably will not be until the project is finished. 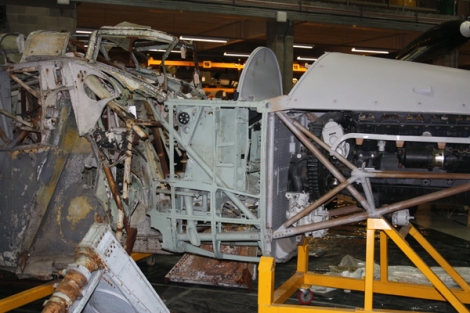 The cockpit area of the Barracuda soon to begin restoration

Barracuda DP872 was the 18th Barracuda MkII from the first production batch ordered from Boulton Paul and was delivered in July 1943. In August 1944, DP872 took off from Maydown on a flight to Easthaven, but five miles short of the airfield the Barracuda spun and crashed in a bog known as Blackhead Moss near Enagh Lough. The crew, Sub Lieutenant DH Oxby, Sub Lieutenant FR Dobbie and Leading Airman DAJ Mew were all killed. In 1971, a team from the Fleet Air Arm Museum and the Royal Engineers recovered the wreckage of DP872 and brought it to the museum at Yeovilton. The partial remains of DP872 have been joined by large pieces of LS931, another MkII, which had crashed on the island of Jura. The aircraft had been flown by the CO of 815 Squadron and had gone missing while on a training mission in January 1945. The wreckage was recovered by the Fleet Air Arm museum in 2000. 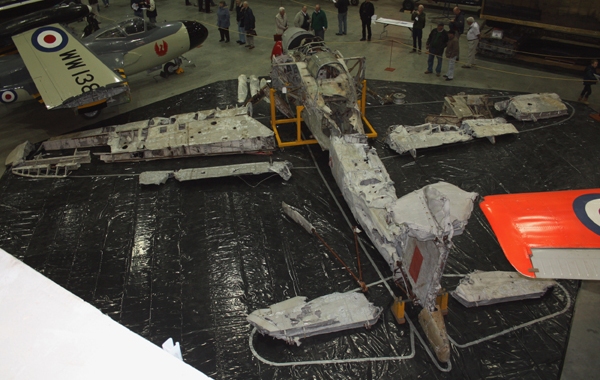 Smaller parts from many other Barracudas have also been gathered, including some pieces from a rare MkV which had crashed in the Solent. These remains were put on display at Cobham Hall, which houses the Fleet Air Arm Museum’s reserve collection.

The Fairey Barracuda has a reputation as one of the most reviled aircraft of the Second World War, and is seen as symptomatic of the second class equipment the Fleet Air Arm was subjected to when other services received much more suitable machinery. The reputation of this replacement for the Royal navy’s much-loved Swordfish and Albacores can be considered at best that it was ineffective and at worst that it was downright dangerous.

There is no doubt that the Barracuda is an aircraft of contradictions. It was unquestionably flawed, unpopular and troubled throughout its life, but it achieved more than its critics like to admit and was a powerful weapon in the Fleet Air Arm’s arsenal. 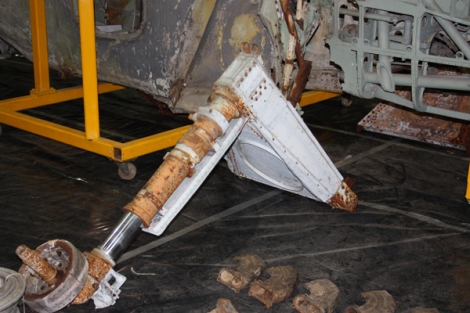 The industrial-looking undercarriage that was such a characteristic Barracuda feature

The Barracuda resulted from a specification issued on the 9th November 1937 for a ‘TSR’ (Torpedo-Spotter-Reconnaissance) aircraft to equip the Fleet Air Arm – later changed to TBR (Torpedo-Bomber-Reconnaissance) to reflect the greater emphasis on dive bombing. It was intended to replace a specification that, incredibly, had only been issued some ten months earlier. (Specification 41/36 had been written around the Fairey Albacore biplane, which was no more than an incremental improvement on the existing Swordfish).

The Fairey Type 100 won, beating designs from Hawker, Blackburn, Westland and Supermarine. On the 30th January 1939, the Air Ministry finally contracted Fairey to build two prototypes, and in June 1940, production aircraft were ordered ‘off the drawing board’. A redesign had to take place in 1940 when Rolls Royce suspended all work on the intended powerplant, the air-cooled Boreas. This was replaced with a Rolls Royce Merlin 30 (later upgraded to the more powerful Merlin 32 in the Barracuda MkII).

On the 7th December 1940 at Fairey’s Great West Aerodrome, Barracuda P1767 was taken into the air for the first time, flown by Fairey test-pilot Christopher Staniland. 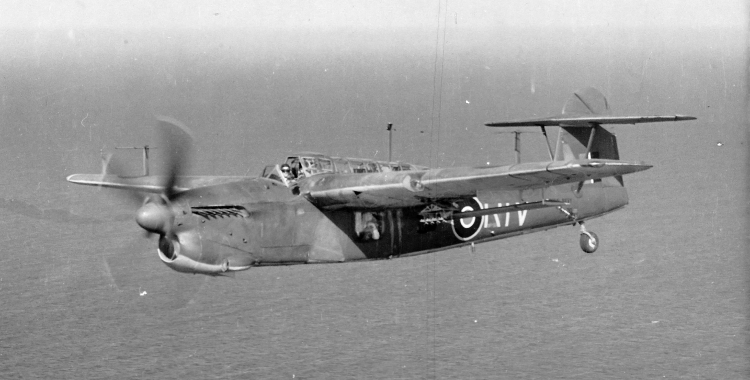 The unorthodox appearance of the Barracuda in flight

The Barracuda’s development from prototype to operational aircraft was even more tortuous than its birth had been. The programme was marred by handling problems, unexplained fatal crashes, poisoned aircrew and radically different behaviour of apparently identical aircraft. In training, a number of Barracudas and their crews were lost when they failed to pull out of dives, the wings folded while in flight or they simply crashed.

Most worryingly, a series of fatal accidents took place in the first half of 1943. From January, two front line squadrons were working up with the Barracuda MkII and during this process several aircraft were lost from both units during torpedo practice. The incidents were thought to occur during tight turns following recovery from a dive – exactly the kind of evasive manoeuvre that would occur after a torpedo run on a heavily armed ship. The A&AEE and the RAE therefore launched investigations into the possible causes. In most conditions the aircraft handled safely, but when the dive brakes were released during the dive, around two seconds later the nose pitched downward. It was felt that this could be unsafe when manoeuvring violently at low level. Coupled with the rudder over-balancing in sideslipping turns, this explained why Barracudas had been found to dive into the sea, or flipped inverted before crashing. Armed with this knowledge, after July 1943 the number of crashes decreased dramatically.

Further development was carried out as the Barracuda became established in squadron service. The availability of ASV X, which enjoyed better discrimination between targets and more accurate bearing than ASV IIN, was assessed. This improved the Barracuda’s anti-submarine ability. The radar was mounted in the rear fuselage with a ventral blister to allow the antenna to scan, uninterrupted by the airframe. The tests were favourable and it was decided that a quarter of all Barracuda production would be this variant, designated Barracuda TR MkIII. 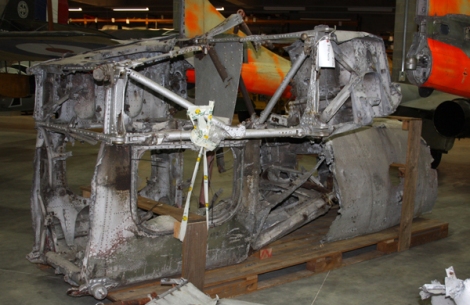 Sir Ernest Lemon, working at the Ministry of Aircraft Production instigated a production ‘group’ for the Barracuda, along similar lines to those used to build RAF heavy bombers. Fairey would be the ‘parent’ company while Boulton-Paul and Westland would be satellite firms. Fairey was made responsible for all design, including production tooling, and scheduling the group’s work, and monitoring the multitude of sub-contractors building individual components for the Barracuda.

In this manner, 2,602 Barracudas were built, 1,192 by Fairey themselves, 692 by Boulton-Paul and 18 by Westland, who left the group to pursue production of Seafires. Their place in the group was taken by Blackburn, which built 700 Barracudas.

In December 1942, 831 Squadron received some MkIs while the squadron’s carrier HMS Indomitable was in the US for a refit. In January 1943, the veteran 827 Squadron at Stretton, after having practised monoplane flight with a Fairey Fulmar, became the first full Barracuda unit with 12 MkIIs. Two months later, 810 Squadron, received Barracudas at Lee-on-Solent. Another battle-hardened squadron, 810 set about working up onshore and aboard HMS Illustrious and would be the first Barracuda unit to see action.

On the 8th June, 810 Squadron embarked on HMS Illustrious. The carrier operated off the Norwegian coast in July, and headed to the Mediterranean the following month to support the Allied landings in Italy. However, apart from anti-submarine patrols during the cruise, 810 Squadron was largely redundant as the Italian fleet surrendered on the first day of operations. 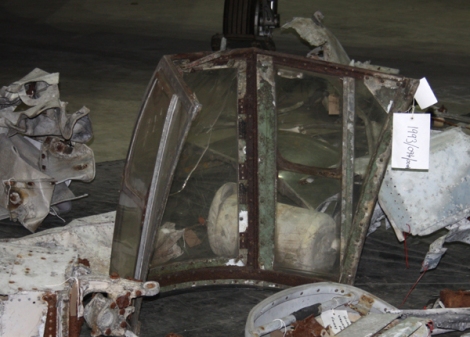 No.8 TBR Wing was formed with 827 and 830 squadrons and from the beginning of 1944, with the Home Fleet the Wing embarked on a dedicated programme of shipping strikes designed to interrupt Germany’s supply train. This campaign was punctuated by strikes on the battleship Tirpitz, which was a constant threat to the crucial Arctic convoys supplying war materiel to the Soviet Union.

Ten Barracudas from HMS Furious took part in the first strike in February 1944, in which a beached transport at Stadlandet was dive-bombed. Despite Messerschmitt Bf109s and Focke-Wulf Fw190s attacking them, the Barracudas escaped without harm. Further raids from carriers in the North Sea were to be carried out over the succeeding months, attacking merchant ships with torpedoes, or dive bombing them.

The battleship Tirpitz was causing immense concern in the Admiralty. As a modern dive bomber capable of lifting a capital ship-killing bomb, the Barracuda was the ideal solution.

Tirpitz had been damaged by midget submarines in September 1943, but it was feared that repairs were nearing completion at Kåfjord in northern Norway, protected by torpedo nets, anti-aircraft batteries, flak ships and smoke generators. Operation Tungsten involved two TBR wings, No.8 (Furious) and No.52 (Victorious) made up of 827 and 830 squadrons, and 829 and 831 squadrons, were to provide the striking force. Meanwhile, Corsairs, Hellcats, Wildcats and Seafires would provide the escort.

A full-scale bombing and air-firing range had been created at Loch Eriboll complete with smoke generators and dummy AA batteries. Repeated practices were carried out, and a full dress rehearsal on the 28th March. The raid was to take place in two waves, with a Barracuda wing in each.

Just after 4am on the 3rd, the Barracudas’ engines were started. The subsequent report from HMS Victorious noted that the crews were ‘brimfull of determination’. The force led by Lieutenant-Commander R. Baker Faulkner of HMS Furious set off for the Tirpitz at low level before climbing to 10,000 ft near the coast. Baker Faulkner used a snow covered valley to cover the approach of the strike force from the South West before plunging on a completely unsuspecting enemy. The Hellcats and Wildcats strafed the Tirpitz and surrounding flak positions, while the Corsairs gave top cover. The Barracudas dived from 8,000 ft, entering their approach at 0529. The TBRs’ fearsomely destructive attack lasted around a minute.

The second strike was already taking off as the first was attacking. The attack was made from around 7,500 ft, and the two columns went into the dive in quick succession. A number of explosions were seen but judging hits was more difficult due to the smokescreen. One Barracuda was hit by AA fire and crashed into a mountain but all others escaped. By the time the aircraft had turned for the fleet, the Tirpitz had stopped firing altogether. Altogether there had been four 1,600 lb hits, four with 500 lb MC, six with 500 lb SAP and one with 600 lb AS.

The same month but over two and a half thousand miles away, the 21st TBR Wing on HMS Illustrious was poised to Sumatra – the port of Sabang, oil storage tanks, the airfield at Lho Nga and other facilities in what was known as Operation Cockpit. On the 19th April at 5.30am, seventeen Barracudas took off from Illustrious accompanied by Douglas SBD Dauntless and Grumman TBF Avenger bombers from Saratoga, and fighters from both carriers. The Barracudas concentrated on the port and when they arrived, it was with total surprise on their side and no Japanese fighters were in the air. They dive-bombed ships in the harbour and, with the escorting fighters strafing the vessels, hits were scored on two merchant ships, two destroyers and an escort ship and large fires in the dockyard were started.

Many further raids were carried out in the Far East and in Northern European waters throughout the rest of 1944 and into 1945. Thousands of tons of shipping were sunk, and more raids took place against the Tirpitz. A number of new squadrons were formed for the light fleet carriers which were being built for service in the Far East. However, the dwindling number of enemy surface vessels towards the end of the war depleted the number of available targets in the aircraft’s intended role. The changed emphasis to shore targets in the Far East theatre meant that it made more sense for the Fleet Air Arm to equip its strike squadrons with Avengers.

Nevertheless, Barracudas served well into the 1950s. Yet no complete examples of this significant and numerous aircraft survive – the restoration will rectify that, in around five years.

One response to “Fairey Barracuda wreckage and recollections”