On this day in 1945, the first jet-powered landing on an aircraft carrier took place. Or did it? Ever since that time, there has been a debate over whether the ‘first jet carrier landing’ took place on 6 November aboard USS Wake Island, or 3 December aboard HMS Ocean.

A Fireball taking off from a carrier during trials

Two years ago, a story was posted on this blog about the latter landing, to which a commenter responded “Sorry, but the first jet carrier landing had been achieved a month before Brown by Ensign Jake West, in a Ryan Fireball aboard USS Wake Island.” So what is the truth?

The details of the two landings are as follows. Taking the latter first, Lieutenant Commander Eric Melrose ‘Winkle’ Brown landed the modified de Havilland Vampire LZ551/G aboard the Colossus-class carrier HMS Ocean in the English Channel. Considerable preparation had been carried out for this flight, involving modifying the aircraft, testing the hardware and developing new approach and landing techniques for jet aircraft.

The earlier example, however, involved none of the careful preparation of the British landing. Ensign Jake West of VF-41, flying a composite-powered (separate piston and jet engines) Ryan FR-1 Fireball had entered the pattern to land aboard USS Wake Island when his Wright R-1820 piston-engine failed. He managed to air-start the Fireball’s General Electric I-16 (J31) engine and – so the story is generally reported – completed the landing under jet power alone, catching the last wire and hitting the first barrier, which had been raised due to the emergency landing.

So which of these very different achievements deserves the title of ‘first’?

The Ryan Fireball was a fascinating aircraft, one of those evolutionary dead-ends that peppered the early post-war period when new technologies were fast outstripping established ones. In the last years of WW2, the mixed-power fighter appeared across the drawing boards of many companies as the best use was sought for the nascent turbojet engine. This was particularly the case in naval aviation, where the disadvantages of the jet were more marked – notably short endurance, poor acceleration and unproven reliability. Although several projects for mixed-power naval fighters were initiated, both in the US (with Ryan and Curtiss) and the UK (Fairey), only the Fireball entered service. (The larger Curtiss XF15C did not get beyond prototype stage). 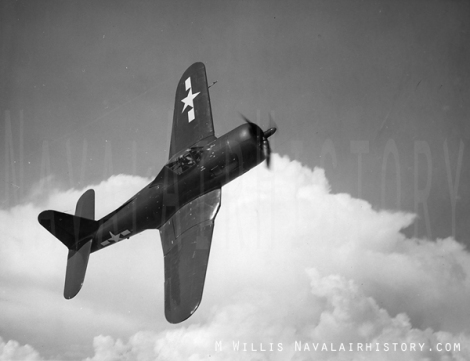 The Fireball was intended as a fighter for use on escort carriers, and as a result was compact and lightweight. Despite having both a piston and jet engine, it was somewhat smaller and lighter than the piston-only Grumman F6F Hellcat, and only a little larger and heavier than the F4F Wildcat, with the same R-1820 engine. It had a top speed slightly better than the Hellcat, a much higher ceiling and usefully greater combat radius. The Fireball was aerodynamically simple and clean, with outer wings of ‘laminar flow’ section, and inner wing sections incorporating the intakes for the jet. A bubble canopy covered the cockpit, which was set high up, giving good visibility all round.

The chief benefit of the mixed-power layout was that cruising just on the piston engine vastly extended endurance. The jet could be brought into play only when increased power was needed – take-off, interception and combat. At all other times the piston engine’s power was perfectly adequate. The mix also had advantages in increasing the band of altitudes where best performance could be extracted. Lieutenant Commander John Gray USN, commanding VF-66, said “We can cruise upstairs for hours feeding the nine-cylinder Cyclone engine – using about 30 to 35 gallons per hour – then start and stop the jet engine several times during the flight when extra bursts of speed are needed. Nor do we need to hunt a favourable altitude for attack.”

Landings were to be made under piston-power alone. 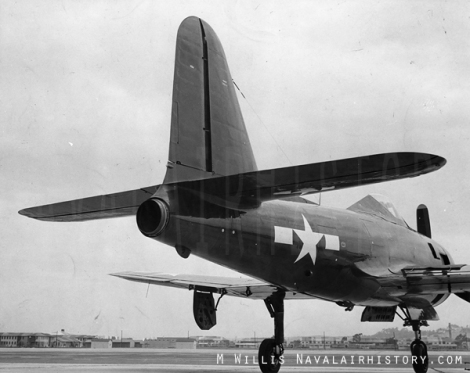 The Fireball first flew on 25 June 1944. Unfortunately, it faced a difficult development, with stability problems – particularly in the carrier landing regime – needing to be overcome before it could enter service. This entailed alterations to the tail surfaces and outer wing dihedral.

Over 700 Fireballs were ordered, but this number was cut to just 66 after the end of the war. The production aircraft joined VF-66 in March 1945, with a period of in-service evaluation beginning. This squadron disbanded in October but effectively became VF-41, with all aircrew and aircraft transferring. It was with VF-41, as it was attempting to qualify its pilots for carrier operations, that West undertook his landing.

It was undoubtedly a brave and skilful piece of flying on West’s part, not to mention cool thinking. And it does appear that it was the first time an aircraft was landed on an aircraft carrier solely under jet power. However, can it truly be said to be the ‘first jet carrier landing’? It was an emergency due to a failure; it was only partially carried out under jet power – the approach was initiated under piston power; it was not entirely successful – although West caught a wire, the Fireball impacted the barrier, making it to some extent a crash-landing; the aircraft was not strictly speaking, a ‘jet’ – the Fireball represented piston-engined technology in terms of its airframe and general design, with the jet engine essentially acting as a supplementary ‘booster’ engine.

The US Navy claims the landing as the ‘first jet landing on board a carrier’ (although it does not generally make a great deal out of the claim) – as seen in this tweet from 2011:

Chuck Yeager, the first man to pilot an aircraft beyond Mach 1, repeated the claim in 2016:

However, the Guinness Book Of World Records classifies ‘Winkle’ Brown’s landing in December as the first – as on its page here.

There is much to be said for Brown’s landing to be regarded as the record ‘first’. It was intentional; the aircraft was a pure jet aircraft and the techniques that Brown developed and used were devised on that basis; it was entirely successful and several landings and take-offs were made on the same occasion.

In the end, therefore, it comes down to a subjective judgement. Or does it? There is some evidence that casts doubt on West’s landing being made entirely under jet power. A book about the Vampire that made the landing contains the following:

“According to US Naval Historian Norman Polmar the USN was embarrassed by this claim as the investigation of the incident shows that only a partial power failure of the piston engine occurred and the emergency landing was made using a combination of the residual power in the piston engine augmented by use of the jet engine. It was pointed out that the Fireball with a dead engine, windmilling propeller, undercarriage and flaps down could not have made it to the deck on 1,600lbs thrust.” (Squadron Leader MJ Biggs, RAF Retd, Vampire LZ551/G, Society of the Friends of the Fleet Air Arm Museum 1993).

This seems highly compelling. The air start procedure for the GE I-16 took 30 seconds, meaning that if a total failure of the R-1820 had taken place, the Fireball would have been without any power in the landing circuit, in the ‘dirty’ condition for that time, if not longer. It does not seem plausible that West would have been able to continue the landing under those circumstances. I have no hesitation therefore in stating my firm conviction that the title of first jet carrier landing belongs to Eric ‘Winkle’ Brown – which is to take nothing away from Jake West’s brave, skilled and, in its way, pioneering landing a month earlier.

3 responses to “The First Jet Carrier Landing – On This Day (or not?)”