The Royal Navy continues its preparations to bring the new Queen Elizabeth-class aircraft carriers into service. Today, another major milestone was passed with the first refuelling at sea from one of the new Tide-class Royal Fleet Auxiliary (RFA) tankers, RFA Tidespring. Naval Air History has been extremely fortunate to see both these vessels at close quarters, and they are both extremely impressive. In her much less obvious way, Tidespring represents almost as big a step forward for UK naval aviation as the carrier does. Even this meeting of the two giants in mid-ocean was no simple matter to arrange, and required meticulous preparation, including tank tests of models of the two ships together to test how they interacted in close proximity to one another. (Featured pic via Twitter, Ali Kefford@akefford)

I saw the Tidespring, quite by chance, while doing some fieldwork on the historic defences at Portland (of which more in a future blog post) last August. This was her first visit to Portland after completing fitting out at the A&P shipyard in Falmouth. Although Portland is no longer a naval base, it still plays host to a number of RFA vessels and in addition to Tidespring, Argus and other ships were present. The visit was welcomed with tugs spraying water in the time-honoured fashion. The RN has this to say about Tidespring and her sisters:

“The Tide Class tankers are replacing the RFA’s current ageing single-hulled tankers. Larger than their predecessors and double hulled, they are an advanced capability specifically designed to provide fuel and water to the carriers. They can also accommodate a Chinook helicopter on their flight decks.” And, in another communication: “The tankers, capable of carrying up to 19,000 cubic metres of fuel and 1,400 cubic metres of fresh water, will provide key support to HMS Queen Elizabeth and her sister Prince of Wales.” 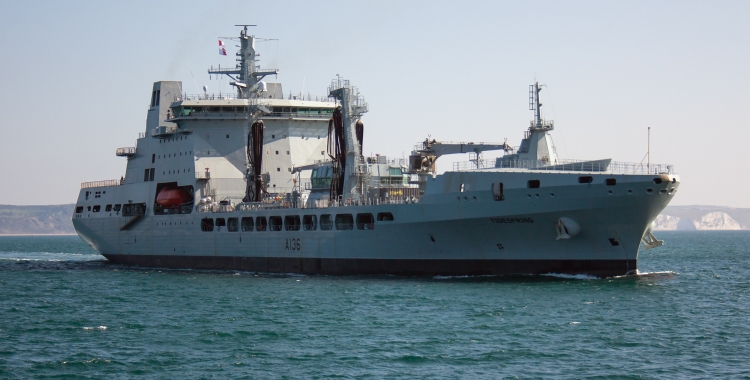 Indeed, the large flight deck on the Tide-class ships is an important feature. Tidespring had her own series of helicopter deck trials last October, to “to write the manual for all future helicopter operations involving the Tide-class tankers” according to the RN press release of 19 October. A Merlin Mk.2 helicopter made numerous landings as part of the ‘aviation sea acceptance trials’. The test pilots from the Empire Test Pilots School, Boscombe Down, carried out a range of tests and measurements. “By taking a vast quantity of data readings – such as the flow of air over the tanker’s superstructure, the ship’s roll, pitch and yaw – and based on the skill and expertise of the fliers, the team will determine in what conditions Merlins and Wildcats can safely land and take-off: known as the Ship Helicopter Operating Limits or SHOL,” the RN added. 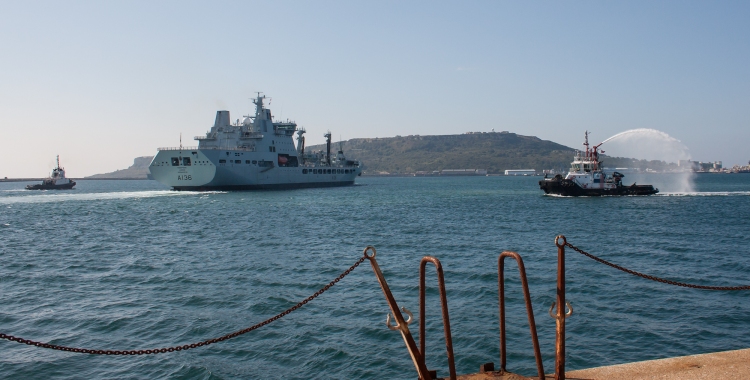 Tidespring arriving at Portland for the first time, greeted by tugs

And naturally, flight trials for the carrier herself, especially being first in class, are vastly more extensive even than this. This is partly why the oft-repeated canard about the carriers lacking aircraft is so frustrating to defence experts and naval historians – there is a vast amount to be studied and proved before aircraft of any kind can operate from the brand new ship. The RN is proceeding as quickly as possible, and in fact somewhat quicker than with previous carriers. The writer Rowland White (author of Phoenix Squadron and Vulcan 607) has researched the time taken for postwar RN first-in-class carriers to reach the point at which fixed-wing deck trials can take place. The results are illuminating:

Despite being unparalleled in scale and complexity, the helicopter trials for the Queen Elizabeth-class have passed without much media fanfare. Moreover, QinetiQ (formerly DERA) and the RN successfully found ways to combine the deck trials for the RN’s Merlin and the RAF’s Chinook helicopters to save time and money. The combined trials saved the need for a second voyage later in the year.

John Anderson, Managing Director Air & Space, QinetiQ, said: “These deck trials have been among the biggest ever conducted, and mark an important step towards enabling the carrier’s rotary wing capability, ahead of the F-35 trials planned later in 2018. Combining the trials delivers on our strategy to help customers make best use of their available funding when conducting mission-critical test and evaluation work.”

The first time Naval Air History saw the carrier was when she put into Portsmouth for the first time in August 2016. The second time was when she left Portsmouth in February 2018 to begin the combined rotary wing trials. On the first occasion, Merlin Mk 2s and Mk 3s were parked on deck, on the second, Chinook Mk 5s, the latter in particular indicating the sheer size of the flight deck. 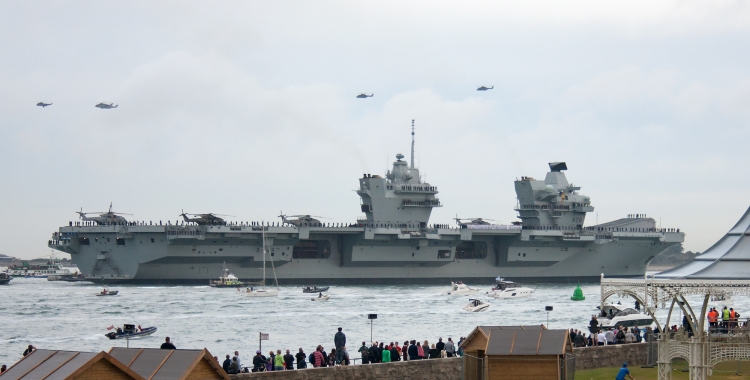 Prior to the trials, QinetiQ at Boscombe Down was required to design and install custom flight instrumentation for the Merlin and Chinook and train the test pilots on simulators. The aircraft deployed to HMS Queen Elizabeth in the Atlantic over four weeks, conducting numerous landings at varying weights and in a range of conditions, including at night. The associated data analysis will help establish the aircraft’s safe operating limits. This is all part of a three-year programme that includes assuring flight operations for the Tide Class Tankers (and Off Shore Patrol Vessels). The aim is to provide rotary wing aircraft clearances for the life of the new aircraft carriers. Phase two tests are underway at the moment, presumably with Apache and Wildcat helicopters. HMS QE left Portsmouth on 10 June and is expected to return in July. 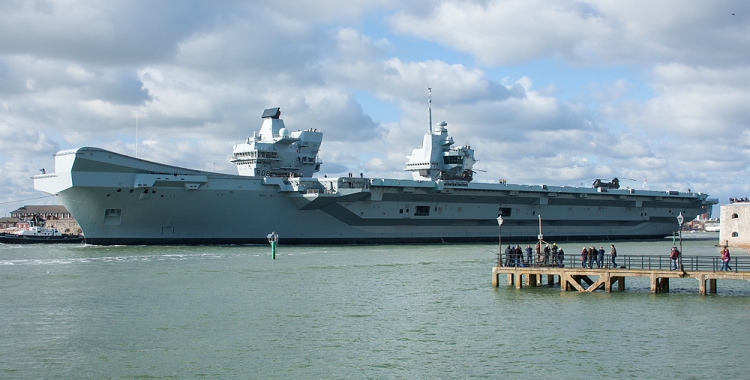 The next step will be to begin fixed-wing trials – in some respects, the process has already started, as members of HMS Queen Elizabeth’s flying and flight deck control teams witnessed F-35B landings and take-offs at the Naval Air Station Patuxent River in May. In the autumn, HMS Queen Elizabeth will sail for the US, while the first four of the jets to decamp to the UK base where they will be stationed, RAF Marham, arrived earlier this month.