During the early part of 1940, Britain and France were scrambling to acquire sources of modern fighting aircraft from wherever they could. At that time there were serious fears that German bombing could virtually destroy the two countries’ aircraft industries and render them all but unable to fight in the air. Even if these dire predictions proved over pessimistic, those industries might not be able to meet the needs of the two countries’ air arms by themselves. When France fell in the summer of 1940, Britain’s position was dire. Even though France had been prepared to take a number of aircraft that Britain felt were unsuitable or obsolescent, France’s capitulation meant Britain willingly took over these orders.

One area where the US was arguably ahead of Britain in 1940 was in fighters for aircraft carrier use. Britain had persisted with developing two-seat multi-role fighters, believing that they would never have to contend with modern land-based fighters, and that carrier aircraft would necessarily have inferior performance. When these views started to change around 1940, there was little that could be done to quickly acquire suitable single-seat fighters. The Grumman F4F naval fighter had been ordered by France as the G-36A in early 1940. The type had had an inauspicious start in life, losing out to the unimpressive Brewster F2A ‘Buffalo’ in the competition for US Navy orders. Grumman completely redesigned the aircraft, however, and the result was superior to the Brewster in speed and agility. The G-36A was just was Britain needed to supplement and in some cases replace its two-seat Blackburn Skuas and Fairey Fulmars.

The aircraft was christened the Martlet (after a fictional bird used in heraldry) and proved perfect for the Royal Navy’s new escort carrier HMS Audacity. The type was flown by 802 Squadron, including Eric ‘Winkle’ Brown, which used the Martlet to shoot down four Focke-Wulf Fw200 Kondor long-range maritime patrol bombers, and undoubtedly make convoys a lot safer than they had been.

The Fleet Air Arm Museum is lucky enough to have acquired one of the original batch of 81 G-36As originally destined for France. These are unique aircraft, from a time when the Fleet Air Arm was prepared to take aircraft not built to UK specifications. Martlet AL246 spent most of its service life at Donibristle and Machrihanish in Scotland where aircraft typically provided protection to Naval facilities and trained aircrew. The Museum recently conducted an in-depth restoration of the aircraft using the wonderful ‘archaeological’ techniques developed with its Vought Corsair. This involved painstakingly removing paint and coatings layer by layer to determine the history of the aircraft in and under its skin.

One of the most striking things about AL246 as it is currently displayed is its colour scheme. Volumes have been written about the colours applied to American aircraft taken into British service. Later on, detailed instructions were provided by the British for camouflage patterns in US-available equivalent paint. Even then, the paintwork carefully applied to aircraft in the US was not always acceptable – for some reason, every Mustang Mk.I to Mk.III (P-51B/C equivalent) was painted in US equivalents of Dark Earth and Dark Green with Sky undersides – and apart from the first order of Mk.Is, all of them were repainted at UK Maintenance Units as soon as they arrived!

The first order of Martlets, AL246 included, were originally painted in what appears to be a very vague approximation of the Fleet Air Arm’s Temperate Sea Scheme – a disruptive pattern of Dark Slate Grey and Extra Dark Sea Grey over Sky undersides. The Martlets were painted in shades of dark and mid green over pale blue. It’s not apparent whether they ever served with the FAA in these colours or were repainted straight away, but other than a few grainy colour photographs taken before the G-36As were delivered, there has been little evidence of the odd scheme. AL246 is living proof. Her flying surfaces still bore the Green/Green/Blue camouflage, and this has been carefully uncovered and conserved. At some point, the pale blue was covered with Sky, and the port wing has been left with this colouring.

The fuselage had been stripped at some point prior to 1964, but the Fleet Air Arm Museum team were able to locate tiny fragments of the original paint adhering to the panel joins and rivets allowing the conservators to ‘map’ the original camouflage plan. Indestructible Paints of Birmingham was commissioned to recreate the original colours, and the fuselage has consequently been repainted as closely to the original pattern as humanly possible. 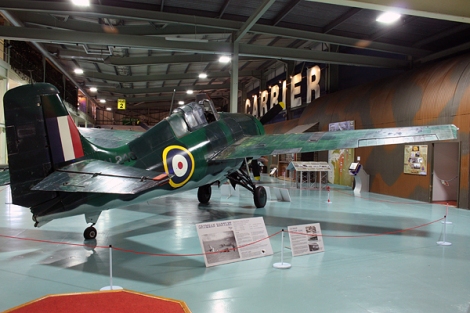 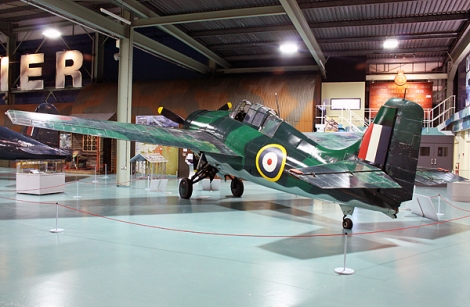 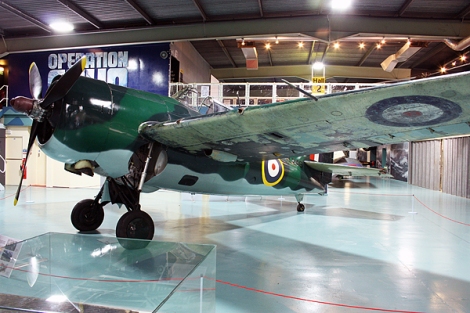 One response to “The Rarest Seabird – FAAM Grumman Martlet”