Twin-engined piston aircraft didn’t become an operational part of the Fleet Air Arm until after the Second World War. This was largely because of the difficulties associated with landing larger, heavier aircraft on a carrier deck but the problems of supply and maintenance of twice the number of engines should not be underestimated. Plenty of twins had been proposed, designed and in some cases even tested by the Royal Navy among other air arms (notably the Grumman XF5F ‘Skyrocket’ in the US) but none had made it into production.

In March 1944, though, the principle was well and truly proved when naval test pilot extraordinaire Captain Eric ‘Winkle’ Brown (see here for an earlier episode in Captain Brown’s remarkable career and a personal reflection on the great man’s career) achieved the first carrier landing of a twin when he put a modified de Havilland Mosquito on the deck of HMS Indefatigable. This had involved developing new techniques to lower the landing speed and counter the take-off swing, not to mention a great deal of skill, but the idea had been shown to be sound, and the Mosquito’s structure strong enough.

Although the RN developed a deck-landing version of the Mosquito, the aircraft never went into frontline service. An aircraft that did, however, was a development of the Mosquito, the twin-engined fighter known as the Hornet. The Hornet was built using a similar plywood-balsa sandwich as the Mosquito, but was smaller, slimmer and was powered by Rolls-Royce 100-series Merlins, which had a higher boost pressure and hence developed significantly greater power. Perhaps most significantly, the Merlins were ‘handed’, which is to say they came in pairs which rotated in opposite directions, cancelling the ‘swing’ that made other twins trickier to handle.

A partially-navalised prototype Sea Hornet F. 20, PX 212, first flew on 19 April 1945. (This aircraft was later converted to serve as the prototype NF Mk 21, a two-seat night-fighter version, and first flew in this form on 9 July 1946). This aircraft was tested by none other than ‘Winkle’ Brown, who declared that it ‘set a standard for naval twin-engined aircraft which would be very hard to beat’.(1) The visibility over the nose was excellent, much better than most single-engined aircraft.

The first image shows a Sea Hornet F. 20 landing on HMS Illustrious. Although the serial is illegible, the aircraft can be identified as an F. 20 because the wing-fold line is just evident outboard of the outermost leading-edge intake. The silver colour scheme indicates this is probably an aircraft from a second-line unit. The A-frame arrestor hook is shown to advantage, and the curve of the propellers captured by the camera demonstrates the ‘handed’ rotation of the engines.

The second image shows another F. 20, this time taking off. This aircraft, again unidentifiable, wears the frontline colours of Extra Dark Sea Grey over Sky, introduced in the early 1950s. This suggests the aircraft is from the only frontline squadron to operate the F. 20, 801 Naval Air Squadron. This squadron did not operate from Illustrious, but may well have undertaken some trials or training on the carrier. The Sea Hornet’s counter-rotating propellers helped cancel the leftward swing experienced by twins such as the Mosquito when the throttles were opened for take-off.

The third image shows another F. 20 coming to grief on an attempted deck landing. The rear fuselage appears to have been torn off at the root of the arrestor frame, and one of the arrestor wires seems to have caught in the propellers. The crash has evidently only just taken place as the deck crew can be seen running towards the aircraft. This incident indicates that, for all the improvements that had been made, deck landing high-performance aircraft could still be a risky business. 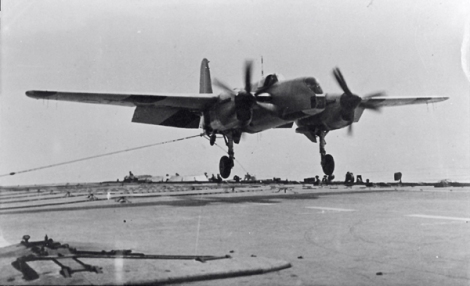 The final image shows a different type altogether. In the latter stages of the Second World War, a number of twin piston-engined naval types were developed, though only the Sea Hornet would see frontline service. A proposal for an attack aircraft to take advantage of the larger decks of the Audacious and Centaur class carriers then under construction, with the aim of increasing the Fleet Air Arm’s hitting power in the Pacific. However, the war ended before the Sturgeon was ready for service, and the delay of the larger carriers rendered it homeless. The aircraft was converted to serve as a high-speed target-tug, as the TT. 2 with the addition of a long nose – described as ‘extraordinarily ugly’ (2) – housing an observer and a synchronised suite of cameras.

The Sturgeon was designed to improve still further on the Sea Hornet’s deck capabilities. The main problem that had not been solved by use of handed engines was single-engined performance and, particularly, landing.

The Sturgeon’s Merlins each drove two three-blade contra-rotating propellers. These not only cancelled swing, but permitted shorter blades to be used. This meant the engines could be placed closer to the fuselage and reduce asymmetric thrust when only one engine was operating. ‘Winkle’ Brown thought highly of this feature, indicating ‘there was no swing on take-off with this aircraft, and it probably would have done quite well on deck, in single-engined landing’.(3)

The TT.2 was operated by 728 Squadron at Hal Far, Malta and No. 771 Squadron at RNAS Ford in 1950-54. This is a production aircraft, probably of the latter squadron, demonstrating the ‘target tug’ stripes on its underside.