The Fleet Air Arm Museum in Yeovilton has the biggest collection of naval aircraft in Europe. The main collection is unquestionably impressive, but the museum also holds a reserve collection that would rival many museums in its own right. This includes small items, ordnance, engines, aircraft and even the world’s oldest ‘aircraft carrier’ (see Flying Boat Lighter Stunts). The collection is held in the specially-built, climate-controlled Cobham Hall, a short distance away from the main museum. The reserve collection is generally opened to the public twice a year, and periodic rearrangements of the exhibits mean that most of the larger items will appear in the main museum at some stage.

Here is a selection of the larger exhibits currently in the reserve collection:

The Douglas Skyraider was the first of a generation of heavy single-engined attack aircraft which were the logical follow-on to the dive-bombers of the 1930s and early 1940s, combining much of the speed and agility of a fighter with the hitting power of a bomber. The Skyraider proved to be a superb attack aircraft, used to great effect by both the US Navy and Air Force. Less well known was its use by the Royal Navy as an airborne early warning (AEW) platform. The Skyraider may seem an unusual choice for this role, but its great load-carrying ability meant it was ideal to carry the bulky APS-20 radar. Four-aircraft detachments from 849 Squadron accompanied British aircraft carriers to act as ‘eyes and ears’ of the fleet between 1951 and 1962. WT121 actually served with the US Navy, with VC11 and VC12, before being refurbished and modified for the RN. It joined 849 Squadron in 1954, and operated from Culdrose and Hal Far. In 1972, WT121 was moved from Culdrose to Yeovilton for preservation at the FAAM. The Museum also has Skyraider WV106. 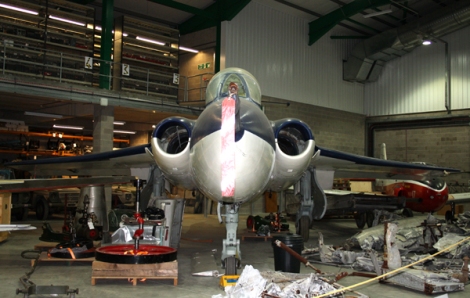 NA.39 (for ‘naval aircraft 39’) was the requirement for a naval strike aircraft that was fulfilled by the superb Blackburn Buccaneer. The name Buccaneer, however, was only properly bestowed on the production aircraft and therefore the six prototypes and short series of 14 pre-production aircraft for trials were simply known as NA.39s. XK488 was the third prototype, and the last of the three development airframes. It first flew in 1958, and was subsequently used for engine trials at RAE Bedford, then airbrake design trials at de Havilland Hatfield. The aircraft helped develop a number of the features that would become characteristic on the Buccaneer, such as the ‘petal’ airbrakes and vortex generators on the wings. XK488 was retired from trial duties in 1966, and the following year was taken to the Fleet Air Arm Museum, where it became familiar to visitors for many years as the Yeovilton ‘gate guardian’. The airframe was slated for restoration in the early 2000s, and now waits to go on display again when the opportunity arises. 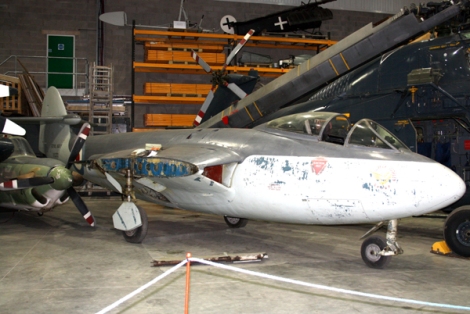 The Hawker P1052 VX272 is one of a number of significant research and prototype aircraft in the Fleet Air Arm’s collection. The aircraft was one of two aircraft ordered as a swept wing development of the Hawker Sea Hawk jet fighter. That said, visitors would be forgiven for mistaking VX272 for a standard Sea Hawk as the aircraft is currently missing its wings. The only feature that clearly betrays the aircraft as the P.1052 is the swept, variable incidence tailplane. VX272 first flew in 1948, and went through a lengthy development programme which contributed to the development of the Hunter as well as more generic aerodynamic and practical research. It took part in deck trials from HMS Eagle in 1952, and high-speed research with the RAE the following year before being retired after a forced landing. VX272 was originally loaned to the FAAM by the RAF Museum in 1990. The aircraft is the perfect partner to the Supermarine 510 (see The First Of The Future) and one day it would be great to see these two research aircraft displayed alongside the BAC 221/Fairey Delta 2.

(Next to the P.1052 is ex-Argentine Beech T34C Mentor 0729 formerly of the 4 Escuadrilla, captured during the Falklands War)

The Sopwith Baby was one of the first practical naval aircraft, and it did sterling, if unglamorous service during the First World War patrolling the coast for enemy submarines and Zeppelins. The Baby was based on the Tabloid biplane, a racing version of which had won the Schneider Trophy in 1913. The Fleet Air Arm Museum’s example is rare indeed which has come to the museum by a circuitous route. Although it is presented as Blackburn-built N2078, which bombed a U-boat off Scarborough in June 1918, it is actually a composite of Sopwith-built aircraft 8214 and 8215. These two aircraft were delivered to a supply depot in April 1916, where they remained until June. At this point, both were issued to Italy for use as pattern aircraft in a scheme to license-build the type. The production plan seems to have come to nothing, as Italy does not appear to have used the Baby and no more examples from Italy are known. However, the parts of 8214/5 survived, and were noted as part of the Nash collection in London in the 1960s. R.G.J. Nash was a collector in the vein of Richard Shuttleworth, who built up an enviable collection of early aircraft. Many of these were placed in a BEA Hanger at London Airport in the 1960s and underwent some restoration by volunteers. In 1966, the parts were moved to the Royal Naval Air Yard at Fleetlands, Hampshire for rebuild.

Find out more about the FAAM’s fantastic reserve collection here