The UK’s new aircraft carriers are once again mired in controversy, with spiralling costs and disagreement over which landing/take-off concept should be applied. The chance that Britain may be moving away from seaborne air power has risen once again.

Against this background, it is appropriate to look at the beginning of Britain’s century of projecting air power from watercraft. The first true aircraft carrier was the Royal Navy’s HMS Furious, converted from a battle cruiser in 1917, while at that time seaplane carriers had been part of mainstream naval forces for a number of years. ‘Flying off platforms’ used to launch small landplanes were also in ever wider use at this time.

A lesser-known variant on seaborne air power was the lighter – although a 1918 Admiralty Seaplane Lighter is now the world’s oldest ‘aircraft carrying vessel’. Lighter H21 was rescued from the Thames mud in 1996, and is currently at the Fleet Air Arm Museum awaiting display. The lighter was used for two purposes. The first was to launch scout-type aircraft directly off a deck built on top of the craft, mainly in the anti-zeppelin role. The second was to carry large flying boats to an offshore location to extend their patrol range. The craft were generally towed by destroyers.

Lighter H21 as it currently is, in the Fleet Air Arm’s reserve collection at Cobham Hall, RNAS Yeovilton. The people to the lower left show the size of the craft

Given the scant attention these lighters receive in the literature of naval air power, and the grainy, distant contemporary photographs of their operation, one would be forgiven for thinking the Seaplane Lighter was little more than a rudimentary raft. In fact, these were carefully-designed, sophisticated vessels that had to perform a number of potentially conflicting tasks. They were larger than might be thought at first – H21 is nearly 60ft long, and surprisingly wide, dwarfing launches and other small vessels. The hull form was a shallow ‘vee’ at the stern with a hard chine and slab sides. At the bow, the chine swept upwards and the ‘vee’ became progressively deeper. The craft was open at the transom, with a recess sloping up towards the bow. The recess mirrored the planing bottom of a flying boat, which would nestle half-in and half-on the lighter while it was being towed.

The overall shape was not far removed from later high-speed launches. There was a reason for this – the lighter had to be towed at speeds of up to 30 knots, even with a large flying boat aboard. The hull form is well developed for riding up on its own bow-wave in a semi-planing condition, and the chine is effective at breaking away potentially parasitic waves and clearing spray reasonably well away from the aircraft on its back. The lighter could not be steered, but two large fins were attached to the underside at the stern to keep the lighter tracking at high speeds.

Part of the raison d’être of the Seaplane Lighter was to extend the coverage of patrol flying boats over the North Sea, primarily to observe the movements of the German High Seas Fleet. The seaplane base at Felixstowe in Suffolk offered an excellent base for the Southern and Western tracts of the North Sea, but the range of the Royal Naval Air Service (RNAS, later part of the RAF) flying boats such did not allow for patrols to the North of Denmark. The Felixstowe F2A, which combined the wings and tail of a Curtiss Large America flying boat with an entirely new British-designed hull, was highly seaworthy and could take off in most sea states. Therefore the so-called ‘lighter stunt’ was developed. 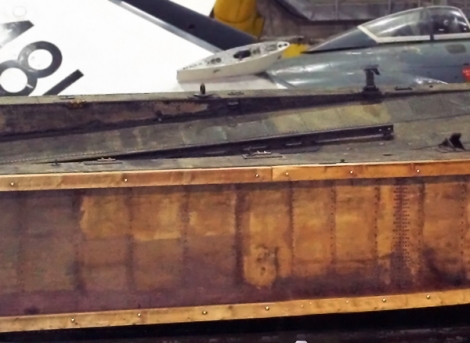 Close-up of the mid-section, showing the rails on which the flying boat would be drawn up

These ‘stunts’ entailed up to three Curtiss H12s or Felixstowe F2As being loaded onto lighters and towed at high speed, each behind a destroyer, far out into the North Sea north of the Netherlands. High speed was necessary to maintain secrecy, and indeed, the towing was generally done overnight. The flying boat’s crew would travel aboard the towing destroyer and just before first light, would transfer to the lighter to warm up the aircraft’s engines and prepare to disengage from the lighter. (At this point, the destroyers and lighters were briefly vulnerable to U-boat attack, hence the importance of secrecy in reaching the flying off position). It appears that on some lighters, the flying boat’s crew could be carried within the craft itself – H21 was found to have rather basic crew quarters in the bow. This would certainly reduce the time that the destroyer group with the lighters would be susceptible to attack.

Closeup of the forward end of the lighter, showing the hatch and portholes for the lighter’s ‘accommodation’

The lighter was designed to be partially flooded like a submarine so it could sink lower into the sea, allowing the flying boat to be floated off. At this point, the flying boats could take off in the normal way. They could therefore patrol far up the Scandinavian coast in search of ships attempting to sneak away from Germany to the north, and still have fuel to return to Felixstowe. After the flying boats had floated free, the lighters’ ballast tanks would then be pumped out with compressed air canisters carried for the purpose, and they would be towed back across the North Sea.

The open stern of Lighter H21, showing how flying boats could be mounted on the craft and floated out when required

The Seaplane Lighter was designed by Thornycroft, a well-known designed and builder of high-speed craft, and built by Royal Engineers at Richborough in Kent. H21, the sole restored example (there are others in existence but in derelict condition) was built of galvanised steel and as its title suggests was the 21st to be constructed. Later lighters were built of mild steel to keep costs down – H21 probably owes its survival to its galvanised hull plating which would be far more resistant to corrosion. Fifty such lighters were ordered, but only 32 were built as the end of the war curtailed any further need for them. Lighter operations do not seem to have extended much beyond the FIrst World War – the ever increasing range of flying boats and the development of the aircraft carrier rendered the lighter unnecessary.

H21 was bought back by Thornycroft after the war and used for many years as a cargo lighter on the Thames. She was last used in 1966, and remained dormant along the banks of the river until spotted by a maritime journalist thirty years later. Conservation work has been undertaken, and research into the lighter’s history continues, along with the painstaking ‘archeology’ of which the museum is so expert. The latter technique has uncovered the colour the lighter was originally painted (green), as well as its original designation, port of registry (Sandwich Haven) and many original details. Plans have been mooted to display the lighter with a rebuilt flying-off deck and a Sopwith ‘Camel’ scout to reflect the slightly better-known use of the vessel.
H21 is part of the national historic ships register – more information and a slideshow of images can be found at the Regsiter’s website:

A dramatic contemporary photograph of Felixstowe flying boat being towed on a lighter can be found at this website: