The involvement of the Royal Navy’s Fleet Air Arm is relatively little known and while numerically small, had a significant impact on the Battle.

Two squadrons of the Royal Navy’s Fleet Air Arm are officially classed as having taken an active part in the Battle of Britain, and 56 pilots of the nearly-3,000 total. And this is to say nothing of the units and men that contributed in other ways to the defence of Britain during the summer and autumn of 1940, in less visible but equally valuable roles.

Following the defeat of France, the Admiralty offered the Air Ministry the loan of naval pilots then under training. There were at that time two courses of naval pilots under instruction at the Fighter School in HMS Raven. All the eligible officers volunteered (executive officers were excluded), and eventually some 23 naval pilots would join Fighter Command squadrons during the Battle. They retained their naval uniforms (and were paid by the Admiralty) but in all operational respects were members of the squadrons they had been posted to. This is not to say they did not retain their identity as naval aviators – Sub-Lt (A) RE Gardner RN painted Nelson’s ‘England Expects’ flag hoist on his 242 Squadron Hurricane, and Sub-Lt AG Blake with 19 Squadron predictably gained the nickname ‘Admiral’. 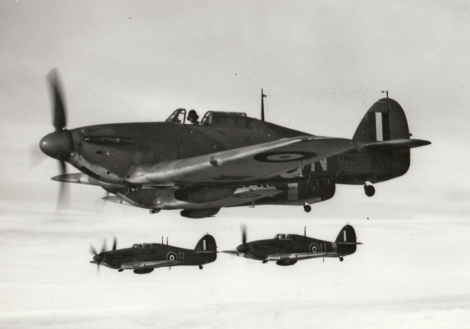 Three pilots joined 242 Squadron, a frontline Hurricane unit returned from France and reformed by Douglas Bader. They began operations with convoy patrols off the East Coast. The first victory of the loaned pilots fell to Sub-Lt (A) RE Gardner RN, who shot down a Junkers Ju 88 in mid-July having after a 50 mile chase out to sea. Midshipman Patterson was unfortunately killed soon after beginning operations with the RAF. The third of 242 Squadron’s Fleet Air Arm pilots, Sub Lt RJ Cork RN, brought down a German aircraft on the afternoon of 30 August when large numbers of German bombers and fighters crossed the Channel. On that day alone, 242 Squadron accounted for 12 enemy aircraft.

On 7 September, the squadron was climbing over the North Weald, when Cork, in company with Bader, saw an estimated 100 Do 17s and Me 110s above them. They climbed hard to reach the formation, despite being dived on and attacked by the fighters, which they had to fight through to get to the bombers. Cork fired a long burst at an aircraft near the tail of the formation, whereupon its port engine caught fire. He was then attacked from astern by an enemy fighter, which hit Cork’s starboard wing. Cork evaded the attack and found himself head-on to another Me 110, which he fired at, seeing the canopy break up and the crew bail out. He was attacked again from astern, and a cannon shell penetrated the cockpit, striking the reflector sight and the windscreen, showering Cork with glass splinters, but he broke away with a ‘Split S’ and lived to fight another day.

On 15 September, during the first action of the day at around noon, Cork brought down another Do 17. That afternoon, over the Thames estuary, he reported the following combat, published in 1943 in the HMSO booklet The Fleet Air Arm:

“We climbed as fast as possible to the attack, but on the way were attacked from above and behind by a number of Me 109s. The order was given on R/T to break formation, so I broke sharply away with a Me on my tail. I was now in a dive and suddenly we flew through the second element in the Wing formation and lost the enemy machine; at the same time I saw a Do 17 on my starboard, flying NW. I dived 6,000 feet to attack and fired a long burst at the port engine, which started to smoke. I attacked again on the beam – large pieces of the enemy machine flew off and his starboard wing burst into flames near the wing tip. He dived straight into the cloud, heading towards a clear patch, so I waited till he came into the open and fired another burst in a head-on attack and the machine dived into the ground.

“I climbed up 1,000 feet and was attacked by two yellow-nosed Me 109s from above, so I did a steep turn to the left and managed to get on the tail of one, fired a very short burst, and then ran out of ammunition. No damage was seen on enemy machine, but as I was being attacked from behind by a second fighter I went into a vertical dive down to 2,000 feet and returned to base. No damage to my own machine.”

An unnamed Fleet Air Arm pilot’s combat report of his first action in the Battle of Britain was published in the same HMSO booklet.

“For the first time the Hun appeared in large numbers and in broad daylight. We (three of us) were diverted over the Channel to meet a reported 50 plus of aircraft. We climbed rapidly to 20,000 feet, and then I saw them in the bright blue of the sky – three solitary white trails coming out of a high layer of cloud, and growing steadily longer. They were some 4,000 feet above us. We gave our Hurricanes everything they had and climbed up towards them. Instead of attacking us they climbed rapidly and went into a defensive circle, making no attempt to attack. We reached them at last at 32,000 feet, our Hurricanes on the point of stall and with no manoeuvrability at all. Still they did not attempt to attack us, although they had manoeuvrability and about twelve times our number. We separated and I flew inside their circle, in the opposite direction to them, and waited until one flew into my sights. I fired and the recoil immediately stalled me and I started to spin. I got out in about 2,000 feet, and looking about me found there wasn’t an aircraft in the sky; in 30 seconds some 40 aircraft had completely disappeared and I had the sky to myself.

“I think after the excitement and the exertion at that height I was a bit dazy, anyway I was rudely awakened by long flickering streams of tracer which seemed uncommonly near my head. Then he shot by in a steep dive, a lean little black blighter – my first 109. I dived as hard as I could make my Hurricane, at any moment expecting a wing to break off, and still the 109 drew away. Suddenly, near the French coast, he started to level off, and, quite satisfied apparently that he was safe, headed over the town of Calais. I got my sights on him, pressed, saw flickering tendrils reach out from my wings to his tail, saw a large piece come adrift and slip by me. Smoke started to trail, then crumpled, and I seemed to do a complete somersault. Flak had opened up at me, despite their own machine. I shot off home as fast as I could, having gained my first probable.”

The naval pilots who survived the Battle of Britain left their RAF squadrons in December 1940. One of them, Sub-Lt MA Birrell RN, went on to be the first to be launched by catapult-armed-merchantman in the Spring of 1941. ‘Dickie’ Cork flew Sea Hurricanes during the Malta convoy Operation Pedestal, during which he made several further kills.