It’s hard to know whether to envy or pity the Fleet Air Arm aircrew who take part in the bundle of naval flying tasks known as Fleet Requirements, as these ‘requirements’ include both the most exciting and the dullest elements of peacetime naval flying. Fleet Requirements pilots could find themselves hurtling towards a fleet of warships in total darkness at ‘zero feet’ in a simulated night attacks, or circling in a fixed pattern for hours to calibrate radar sets.

Sea Hawk SAH4 (serial unknown – does not appear to be marked) during its Fleet Requirements Unit service, showing off the gloss black colour scheme

Fleet Requirements can perhaps be best summed up as the flying that sits between training and the front line. It involves helping prepare personnel, hardware and systems for action. Fleet Requirements was an early example of outsourcing defence functions to the private sector. Up to 1950, these functions were carried out by second-line Fleet Air Arm squadrons doing everything from target-towing to ‘clockwork mouse’ flying – endless touch-and-go landings to train flight-deck ‘batsmen’. At this time, the responsibility for these duties passed to the civilian Airwork Ltd, with the Bournemouth-based company providing the aircrews and looking after all the administration and day-to-day running, while the RN provided the aircraft.

The first Sea Hawks arrived at the FRU’s base at Hurn (now Bournemouth International Airport) in September 1958. The Sea Hawks were in many ways ideal. Although they were becoming obsolescent as air-to-air fighters, and were being replaced in frontline service by Sea Vixens and Scimitars, they were still highly capable ground attack aircraft and consequently perfect for simulating fast jet attacks on warships. Moreover, they were very pleasant, straightforward aircraft to fly and maintain.

Another view of WN108

The Sea Hawks required relatively light modification to make them fit for Fleet Requirements work. The main change was to the port underwing fuel tank which was altered to accept a Harley Light in its nose. The light was based on a proprietary landing light designed by the Harley company, and was intended to increase the aircraft’s visibility when it was providing a convincing target for anti-aircraft guns. In addition to the Harley Light, the aircraft also gained an attractive and distinctive all-over black colour scheme.

Many Sea Hawks serving with FRU had already had eventful service lives. WN108 (pictured) to take one example, had been built as a Mk3, served with 806 Squadron during the Suez operations in 1956, been damaged in a low-flying training accident and upgraded to FGA Mk5 standard. This aircraft served with the FRU between 1958 and 1963 before going into long term storage. Another example was XE489, which as the second-last Sea Hawk built for the Royal Navy was a relatively new aircraft to join the FRU in 1961. It had nevertheless still seen a good deal of the world already, with a tour round the Mediterranean in 1957-58 with a frontline squadron, and served variously with naval stations at Abbotsinch, Fleetlands and Brawdy before transferring to the FRU.

The Sea Hawks formed one part of a family of aircraft at the FRU. They shared duties with Sea Furies in the early years, while during the 1960s the main other type operated by the unit was the Gloster Meteor TT20. From 1961, the Meteors were employed exclusively as target-tugs leaving the Sea Hawks to perform all the other roles.

This was not always rewarding for the pilots. Some FRU work could be extremely repetitive, such as radar or gunsight calibration. One Sea Hawk was regularly seen over the Vickers Armstrong factory in Crayford between 1958 and 1960, metronomically performing what one observer described as “relentless figures of eight” for up to an hour at a time.

Immeasurably more satisfying was the FRU’s contribution to Operational Sea Training, or OST. This was the programme run from the naval base at Portland designed to mould naval ships into fighting units. The training culminated with the ‘Thursday War’, an all-out effort to test the ships’ capabilities in action and in which FRU was heavily involved.

Sea Hawks would launch low-level attacks on the ship being assessed, usually at as inconvenient a moment as possible. Vessels would find themselves fighting off bombing and strafing attacks just as they were negotiating a challenge such as a cleared passage through a simulated minefield where they had severely restricted movement. Repeated attacks would be made, to different profiles, while the ships also had to cope with a range of other issues such as fire and equipment malfunction, and defending against submarine or surface vessel attack.

A model built by the author representing Sea Hawk XE339, one of the last FRU Sea Hawks, showing the Harley Light in the underwing pod

The Sea Hawks’ capability and flexibility was put to similar use during FOST – Flag Officer Sea Training – exercises when instead of testing whole ships’ crews, they would pit their wits against aspiring admirals.

The Sea Hawks continued in FRU service until 1969, long after they had been replaced in frontline RN use by more modern types. This was a testament to the aircraft’s suitability and serviceability – despite some aircraft having long and colourful service careers before reaching Hurn, the FRU was able to keep them flying like clockwork for over a decade.

Nevertheless, Fleet Requirements work was becoming more complex with new challenges such as sophisticated radar jamming and anti-ship missiles to contend with, and the Sea Hawk’s time had undoubtedly passed.

The aircraft preservation movement has a great deal to thank the FRU for, as without it there would not be nearly so many Sea Hawks still in existence in Britain. Because of the unit, Sea Hawks were kept flying nearly ten years after they were withdrawn from frontline use and doubtless many of these aircraft would otherwise have been scrapped. Furthermore, because the Sea Hawk was still in UK service, a number were kept in long term store rather than being disposed of, and spares supplies were maintained. Many of the surviving Sea Hawks are former FRU examples – the two mentioned above, WN108 and XE489 both survive. The latter is at Gatwick Aviation Museum in Charlwood, and the former is with the Ulster Aviation Society in Lisburn, Northern Ireland – resplendent in its FRU black and wearing the white code number ‘033’ that it bore in the 1960s at Hurn.

The sad sight of FRU Sea Hawk 034 awaiting scrapping, after having spent time on a weapons range

Even the sole flying example, the Royal Navy Historic Flight’s WV908 may owe its survival to the FRU. Although this aircraft never served with the unit, it evidently nearly did – while in long-term storage (‘LTS’) at Halton, the aircraft was photographed painted in a FRU colour scheme, indicating that it had been earmarked for FRU at some point. Furthermore, when WV908 was being restored to flight, a large number of serviceable components were sourced from surviving former FRU Sea Hawks including XE489’s engine which was in good condition. 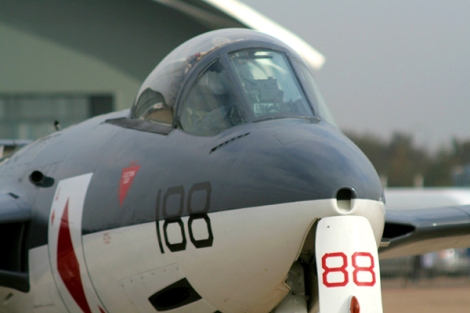 The Royal Navy Historic Flight’s Sea Hawk WV908, possibly once assigned to the FRU, during display at Duxford in 2007

The Sea Hawk was an aircraft from a simpler age whose relatively low performance belies considerable usefulness over the years. Naturally, most of the focus on its career has been with the ‘shooting wars’ it saw served with some distinction in, including the Suez crisis and the Indo-Pakistan war. This should in no way detract from the 11 years of sterling service it gave behind the scenes helping to hone the Royal Navy’s ships, crews, hardware and procedures into the capable force that, despite years of peace, was able to remain fully prepared for war.