The magazine adverts of the 1930s-40s provide a fascinating view of how naval aircraft manufacturers saw themselves, and wished others to see them. During this period, artwork in the aviation press was commonly employed to advertise products, raise public awareness and maintain or improve what would today be called ‘brand reputation’. Aircraft built by the Blackburn Aircraft Company in the pre-war and wartime periods tend today to be thought of as at best solid and workaday, and at worst clumsy failures. However, during the inter-war and wartime periods, artwork commissioned by the Blackburn company and its suppliers built an image of the company’s products that showed them off as both glamorous and effective. 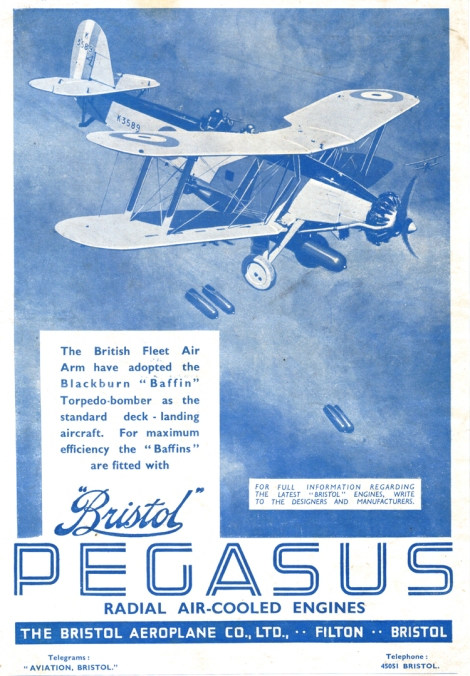 Earlier advertisements focussed on the capabilities of the aircraft in their offensive roles. During the long period of peace, the advertisements were sometimes surprisingly action-packed. A 1933 advert for the Bristol Pegasus engine as fitted to the Blackburn Baffin torpedo bomber shows the aircraft in a steep dive, releasing under-wing mounted bombs while a torpedo remains attached. The rear gunner has swung his Lewis gun towards an enemy fighter that is making a beam attack.

The advertisement claims that ‘for maximum efficiency, the “Baffins” are fitted with Bristol Pegasus air-cooled radial engines’. This was no idle boast – the Baffin was basically an updated Ripon with its Napier Lion liquid-cooled engine replaced with a Pegasus. The change was intended to increase both range and load-carrying ability, which it achieved, though the performance of the ‘new’ aircraft was only marginally better than its predecessor’s. The artist has certainly worked hard to convey the increased load-bearing abilities, by showing no fewer than four bombs and a torpedo carried into action by the Baffin – a load the aircraft was unlikely to have borne. (The Baffin was cleared to carry a single 2,000 lb bomb or MkVIII/IX torpedo, or three 530 lb bombs, or six 250 lb bombs).

Interestingly, as war drew closer, the advertisements for Blackburn aircraft appear to become less warlike. As Blackburn developed more modern aircraft, such as the Skua fighter/dive-bomber and the Roc turret fighter, a series of paintings by naval artist Charles E. Turner were used to show the aircraft off. These tended to depict the types in a romanticised fashion, with a great deal of attention paid to the flow of light across all-metal structures, and often solitary aircraft flying above sweeping seascapes. This approach was also carried across to illustrations used by suppliers. The use of essentially peaceful scenes could be interpreted as focussing on the role of the aircraft in protecting peace. Even an advert showing Skuas in a steep dive (as in a dive-bombing run), used in a programme for a pre-war Hendon air display, emphasised beauty of line, speed and modernity rather than offensive capability.

Another shows a Skua in pre-war colours flying above HMS Ark Royal and her escorts. It appears Turner may have been working from at least some images of the prototype Skuas, as this rendering shows blisters on the cowling which were only present in the two pre-production aircraft. Turner also tended to depict the Skua with a larger spinner than the aircraft actually used, making it appear sleeker than in reality.

An advert for KLG sparking plugs, used in the Roc fighter, takes a similar approach to several of Blackburn’s in-house artworks. Though the advert was still being used in December 1940, the image shows a Roc in the pre-war silver doped scheme, flying above a sunset seascape empty of all but a distant and unescorted aircraft carrier (which is clearly based on the American Navy’s Saratoga-class ships rather than any British carrier of the time).

Though these adverts carried over into the early part of the war, they were soon replaced by a very different style of artwork. Images appearing from the second half of 1940 return to the action-packed content of the early 1930s. Instead of hypothetical combat, however, the new artworks aimed to capitalise on the Skua’s brief but sometimes spectacular active service.

One of several adverts showing the Skua’s successful combat record, here the sinking of the cruiser Königsberg

At least two paintings were commissioned showing the sinking of the cruiser Königsberg by Skuas in April 1940. This was the first sinking of a major warship by dive-bombing, and the Blackburn company was justifiably proud of the achievement of its aircraft. In one of these images we see a rather foreshortened but generally accurate depiction of the cruiser, with a dramatic explosion on its quarterdeck while the Skua that successfully dropped the bomb pulls out of its dive. (Compare this photograph of the cruiser). A second Skua is seen in the dive, about to drop its own bomb. In reality, most of the armour-piercing 500 lbers that struck home pierced the cruiser’s light deck armour and exploded deep in the hull. The caption indicates that three direct hits were made – in fact it was probably more, while several near-misses did serious damage to the hull through water-hammer effect.

A second in-house artwork from the same period depicts the efforts of Skuas of 801 and 806 Squadron operating from Orkney to harass German communications in Norway. In the second half of 1940, the Skuas attacked coastal convoys, fuel tanks and other shore installations with some success. The latter advert was in use as late as December 1943, more than two years since the Skua had been withdrawn from frontline service.

The style of these wartime adverts is somewhat rougher than their predecessors – it may be that they were completed quickly to take advantage of success stories. Far less attention seems to have been paid to capturing the aircraft themselves, compared to showing the destruction they are wreaking upon the enemy. The images tell a story, complete with flak-bursts, explosions and sinking ships. The aircraft are placed to show their role in the story rather than in necessarily realistic positions.

Interestingly, as the war progressed, the advertisements reverted to a style more reminiscent of earlier days. An April 1945 advertisement for the Blackburn Firebrand torpedo strike fighter shows three aircraft in a similar pose to the Baffin of 1933, diving into the attack with torpedoes attached. The image also brings to mind the late-1930s image of Skuas diving with no enemy actually in view – focussing on speed, sleekness and grace. Not terms that were often associated with the huge, troubled Firebrand.

This could have been a result of necessity. No Blackburn design had made it into active service since the Skua, and although aircraft built by Blackburn to other company’s designs had formed the backbone of the Fleet Air Arm throughout the war, this was apparently not something the company was as keen to promote. The Firebrand was crawling towards a period of frontline employment with the Fleet Air Arm but by April 1945, it had not yet entered squadron service.

One response to “Naval aircraft, through their creators’ eyes”