When the current HMS Ark Royal (R07) leaves Portsmouth early next year for a Turkish scrapyard, it mark only the second time in 99 years that there will not be an aircraft carrier bearing the name in service, construction or reserve*.

Ships bearing the name Ark Royal have been among the most famous, successful and powerful ships in the Navy. And yet the first association between the name of the famous Elizabethan flagship and naval aviation was a distinctly unglamorous converted collier. In fact, this overlooked ship provided valuable service for thirty years, outlasting her far more famous successor.

In retrospect it is surprising that such a famous name should have been applied to so unprepossessing a ship. The first Ark Royal since Howard of Effingham’s 1587 galleon was a merchant ship bought while under construction – seemingly the antithesis to the rakish ‘race-built’ galleon of legend.

HMS Ark Royal after modification to a catapult ship (www.naval-history.net)

The reason such an illustrious history should be invoked for a pedestrian lay in the changing nature of warfare. The Ark Royal was created to oppose an ‘Armada’ not of the sea but of the air. According to Richard Humble:

Indeed, after the failure of the airship HMA No1 ‘Mayfly’ in 1911, the Royal Navy’s rigid airship programme had not recovered, while the German Imperial Navy had a large number of advanced Zeppelins to call upon for reconnaissance and bombing.

In 1912-13, an armoured cruiser HMS Hermes had been modified with a launching ramp on her bow. This development was relatively short-lived, but persuaded the RN that there was merit in ships that could carry fixed-wing aircraft. A collier, under construction at the Blyth Shipbuilding Company was selected. The hull had largely been completed, but its typical sweeping merchantman sheerline was levelled at the bow to create a clear working foredeck for handling aircraft and running up engines. Machinery and superstructure were moved to the stern to ensure a clear forward space for aircraft handling.

The ship’s hold space was constructed as hangars capable of accommodating up to ten seaplanes. Two steam cranes were added to lift aircraft on and off the deck. Unlike the Hermes, seaplanes could not be launched from Ark Royal using trolleys on the deck.

When construction finished in 1914, the Ark Royal became the first ship in the world to be completed as an aircraft-carrying ship. It was also the largest seaplane carrier of the war, at 7,020 tons displacement. The Ark Royal’s most potent weapon was the Short S.184 seaplane capable of dropping a 14-inch torpedo.

By the time Ark Royal commissioned in 1915, the value of ship-bourne seaplanes had been proven. The daring raid on Cuxhaven had done little damage to the dockyards, but it had panicked German authorities and caused the High Seas Fleet to withdraw ships to more distant anchorages.

Rather than operating with the Home Fleet, Ark Royal was dispatched to Mediterranean with eight seaplanes. When the Dardanelles campaign began, Ark Royal was quickly on hand. The ship reached Tenedos, 15 miles from from the Dardanelles, on 17 February. Within two hours of its arrival, one of Ark Royal’s seaplanes was flying a combat reconnaissance, piloted by Wing-Commander Samson.

The Ark Royal’s aircraft took part in reconnaissance and gunnery spotting for British ships during the campaign and the subsequent landings at Gallipoli. The seaplanes were not suitable for offensive missions over land, and these duties were taken on by land-based aircraft flying from Tenedos. 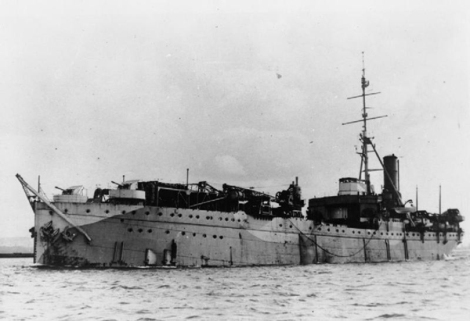 HMS Ark Royal later in life as HMS Pegasus, after the addition of a tripod mast and Oerlikon anti-aircraft guns (Imperial War Museum) – see this post for more information about naval AA weaponry

However, the arrival of German and Austro-Hungarian U-Boats in the area meant it was no longer safe for the slow converted merchantman. According to Richard Humble:

“Ark Royal could only make 10 knots and it would have been suicide to keep her forward during a submarine scare.”

She was withdrawn from the forward area in July 1915. Most of the front line air-support work was therefore taken on by the smaller but much faster converted cross-Channel ferry Ben-My-Chree, whose seaplanes scored the first ever sinkings of enemy vessels by air-dropped torpedo. Ark Royal transferred to the Macedonian front before returning to the Mediterranean as a ‘mother’ ship for all the other seaplane carriers.

Ark Royal was back in action for the final seaplane carrier mission in Mediterranean, which took place in early 1918. On 20 January, Ark Royal and the converted ferry Manxman despatched their aircraft to attack the Turkish battle cruiser Yavuz, formerly the German Goeben, the ship that had brought Turkey into the war on the side of the Central powers. When the Yavuz ran aground at Nagara Point near the Dardanelles, after a sortie into the Mediterranean, several attempts were made to destroy or damage the ship by gunfire and with aircraft. The Ark Royal’s seaplanes scored several hits on the battle cruiser, but the small 65 lb and 112 lb bombs were insufficient to cause significant damage. This was “World War I’s heaviest sustained air attack on a warship,” according to Norman Polmar. Altogether, around 15 tons of bombs were directed at the ship.

After the war, Ark Royal saw service at trouble spots in the Black Sea, Somaliland, Basra, the Sea of Marmara and Smyrna, mainly by ferrying aircraft to RAF units on location.

Later, Ark Royal was taken out of front line service, but still had a vital role to play. The ship had been overtaken by the development of true aircraft carriers, of which the Royal Navy had five in service by 1930. Ark Royal’s uninterrupted foredeck made her ideal for trialling the catapults and accelerators being developed to launch aircraft directly from ships.

Between 1930 and 1939, Virtually every type of design for a ship-based catapult was mounted on Ark Royal’s forward deck and subjected to proof trials. Some 15 different marks of catapult underwent trials on the former seaplane carrier. These included compressed-air, hydraulic, hydro-pneumatic and cordite powered catapults.

During this period, Ark Royal would lose her famous name. A brand new aircraft carrier was laid down in 1935, and it was decided that she would be called Ark Royal. This might appear to be a snub on the old workhorse that had served since 1914, but this was not necessarily the case. After all, the work she had done in the First World War and beyond had created an unbreakable association between the famous name and naval aviation. The existence of the new, state of the art carrier was proof of the earlier Ark Royal’s success.

A Supermarine Walrus overflies HMS Pegasus while in service as a catapult training ship (www.seawings.co.uk)

Fittingly, the older ship, now named HMS Pegasus, was equipped with a section of mock flight-deck fitted over a track and compressed-air launching gear as part of trials for aircraft carriers including the one that would later take its original name.

At least 140 launchings were carried out using this rig, using both dead loads and five different types of manned aircraft. This system, was developed into the BH.I accelerator fitted to the carriers Glorious, Courageous, Argus and Ark Royal itself, and later the BH.III that was fitted to most WWII British aircraft carriers.

When war came again in 1939, Pegasus was needed once again. Her hangar space made her a useful for transporting aircraft to the remoter parts of the British Isles such as Orkney and Shetland. A more pressing need would see her restored to the front line.

The threat to Atlantic convoys from long-range land-based aircraft meant that a method was needed to operate fighters at sea. The RN did not have nearly enough aircraft carriers, and the first small carriers based on merchantman hulls were still over a year away from commissioning.

A plan was developed to fit catapults to merchant ships, so fighter aircraft fitted with catapult spools could be launched. Even this would take time to implement. Pegasus, however, could be rapidly fitted with the necessary apparatus, and moreover had internal space to carry up to five fighters.

In 1940 she was equipped to carry five Fairey Fulmar ship fighters and fitted with a P.II (‘pyrotechnic’ or ‘projectile’) catapult. This was made up of a trolley running on a simple track, powered by a battery of rocket motors of the type used in the RAF’s 3in rocket projectiles.

Pegasus was ready for this role rapidly, and joined convoy OG47, outward bound for Gibraltar, on December 3, 1940. She bore a Fulmar sitting on her catapult “like a great gaunt sea bird”, according to Kenneth Poolman. If an enemy aircraft was sighted, the Fulmar would launch, and intercept the contact. This done, the pilot was instructed to land at ‘the nearest airfield in Northern Ireland, if there happens to be one convenient, or in the sea if circumstances justify it’. Pegasus carried no means of communication with her aircraft and no radar for fighter direction – it was a relatively rudimentary solution.

In April the following year, Pegasus was joined by three further RN Fighter Catapult Ships, Maplin, Ariguani and Springbank, which were armed merchantmen equipped with P.II catapults athwart the hull. Pegasus was in fact the only fully Royal Navy ship used for these duties – the three other Fighter Catapult Ships retained their mainly-Merchant Navy crew and RN Reserve commanders. Aircrew and maintenance personnel were drawn from the Fleet Air Arm.

Once a sufficient number of Catapult-Armed Merchantmen (CAM Ships) had been introduced, Pegasus was once more withdrawn from the front line. For the second time she began her modest but essential career as a training ship. Seaplane training was conducted from the vessel until 1944, when she became a barracks ship.

After the war, Pegasus was sold off without ceremony and it appeared that her remarkable, if workaday career might continue. She was sold to a company that renamed her Anita I and intended to operate her as a merchant ship. The process of conversion began in Antwerp in 1947, but ceased the following year when the operator went out of business. She returned to Britain after having been bought by a UK scrap company, and after thirty years sterling but uncelebrated service, the first aircraft carrier Ark Royal was broken up at Grays, Essex.

*There was a two year period after the sinking of HMS Ark Royal (Pennant Number 91) before the keel was laid on the ship that would become HMS Ark Royal (R09). This ship was initially known as HMS Irresistible – however, during this entire period the seaplane carrier Pegasus, formerly HMS Ark Royal, was in service, so in certain respects there has been an ‘Ark Royal’ in the RN from 1914 to the present.

2 responses to “The Unsung Ark Royal”