The Avro Vulcan was a truly versatile aircraft, whether as a part of Britain’s nuclear deterrent, a conventional bomber at low and medium altitude and even as a tanker. However, the Vulcan also performed as a maritime reconnaissance aircraft from 1973 to 1982 with 27 Squadron RAF at Brize Norton. There was even a dedicated reconnaissance variant of the bomber, the B.2 MRR (maritime radar reconnaissance), although only nine aircraft were converted to this status.

Vulcans were capable of spending long hours searching the sea, but needed additional navigational and sensor equipment to be truly effective

Reconnaissance over the wide stretches of sea and ocean that surrounded Britain and were of strategic interest was a crucial role for the RAF in the cold war. The ‘Sea Lanes of Communication’ (SLOC) must be protected at all costs.

With the transfer of the strategic nuclear role from the RAF to the Royal Navy in 1969, the RAF was free to consider wider roles for its now-conventional bombing force. The Victor already had a secondary reconnaissance role, so it was natural to consider how other aircraft might supplement the Nimrod squadrons and other reconnaissance assets.

Each of the RAF’s aircraft which performed the maritime reconnaissance role in the Cold War actually had subtly different tasks to perform and were specialised in different ways.

The Nimrods of course were specialist anti-submarine aircraft, well-suited to flying at low level and low speed, hunting the seas for the Soviet Union’s submarines and capable of attacking them once they were found. The Victor’s role was strategic reconnaissance, tailored to photographing large areas of sea or land using a reconnaissance tray that fitted in the aircraft’s bomb bay.

The Vulcan MRR’s role was more general. It would use its H2S Mk 9A radar to sweep large areas of sea from medium altitude to identify hostile shipping or other surface threats. The veteran 27 Squadron was earmarked for the new role, and shortly after it disbanded as a bomber squadron, it reformed as a maritime reconnaissance unit at Scampton under the command of SACLANT (Supreme Allied Commander Atlantic). The Atlantic Command area extended from the Arctic to the Tropic of Cancer, and extended from the East coast of the US to the West coast of Africa and Europe. SACLANT’s role was to protect SLOC and the at-sea nuclear deterrent.

In addition to the H2S radar, the B.2 MRR was fitted with a suite of other sensors and navigation equipment to fit it for the new task. 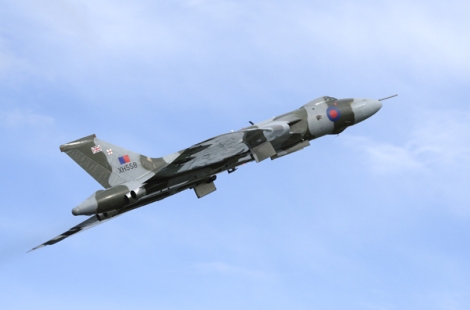 The new equipment included a LORAN-C navigation receiver, which enabled accurate positioning over the sea when in range of LORAN transmitters. In their original bomber role, the Vulcan only needed to navigate effectively over land which its H2S radar was intended for. A localizer pod was installed beneath one wing to aid instrument landing. A number of still-secret electronic sensors were added to the Vulcan, leading to a number of unfamiliar aerials appearing on the modified aircraft.

A camera was fitted in the bomb-aimer’s window, and air-sampling pods modified from Sea Vixen drop tanks could be fitted on aircraft that had the appropriate hard-points installed. These could be used for testing the air for contamination, such as dust from atmospheric nuclear tests. The Vulcan MRRs were painted in a glossy camouflage which made washing them down after such activities easier.

The AN/APN-171 TFR terrain following radar was deleted, being redundant for over-sea operations. Some 27 Squadron aircraft had never been fitted with this, but on other aircraft the radar and its nose thimble was removed and replaced with a circular cap.

The nine adapted aircraft were delivered to 27 Squadron over the course of four years from 1973. The squadron also used some conventional Vulcan B.2s. These were a mix of Olympus 301 and Olympus 201 engined aircraft, but after a time, the 201 engined types came to dominate as they were more suitable for the MRR role than the former Blue Steel-carrying Vulcans with their more powerful engines.

The Squadron’s main role would involve it calling for support from maritime strike aircraft in the event that a threat to SLOC or a RN SSBN was identified. As well as 27 Squadron, 617 Squadron ‘Dambusters’ and 35 Squadrons were allocated with the MRR role in the event that 27 needed support.

XL361 carried out 27 Squadron’s first operational maritime reconnaissance mission. The aircraft flew from Scampton to the Faeroes Gap, where it took part in a joint exercise with RAF fighters and strike aircraft as everyone got used to the new arrangements.

The Vulcan MRRs continued carrying out their sea-sweeping role until 1982. It was envisaged that 27 Squadron would continue to perform the role into the 1980s, possibly joined by further squadrons, after the draw-down of the Vulcan in the bomber role. However, it was not to be, as the cost of extending the Vulcan’s life was felt to be too great.

Quite rapidly between April 1981 and March 1982, 27 Squadron’s Vulcans were struck off charge or transferred to other units. The squadron’s duties were shared out among the Nimrod squadrons at Kinloss, which took on the SACLANT reconnaissance tasks, and VC10 units at Brize Norton, which gained the air sampling pods and associated duties. 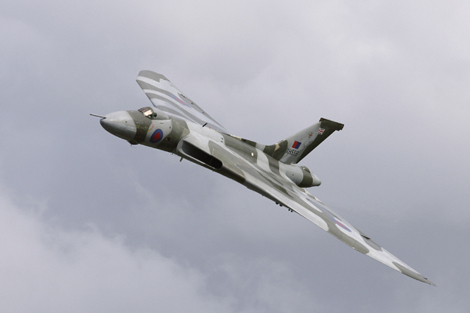 Vulcan XH558 operated as a strategic and conventional bomber, a maritime reconnaissance aircraft, a tanker and finally dedicated display aircraft in three decades with the RAF

The Vulcan had much to recommend it as a maritime reconnaissance aircraft. It had long range, a suitable radar for identifying surface ships and was able to perform well at medium altitudes, while its wings were capable of taking pylons for external stores and there was room in the airframe for additional equipment. In fact, the Vulcan B.2 MRR could conceivably taken on more of the Nimrod’s roles – unlike the Victor SR.2, the Vulcan’s bomb bay remained free for anti-submarine stores, and it was well-suited to low-altitude flying. With no need for the ECM equipment in the tailcone, a magnetic anomaly boom could have been fitted and the underwing sampling pods indicate that a ‘snifter’, detecting trace gases that give away a submarine’s presence was a possibility.

Two of the Vulcans that were converted to MRR status survive, while the nose sections of two more are preserved. XJ823, the first Vulcan to leave the squadron during the draw-down period is preserved at Carlisle Airport, and it is billed as being the only Vulcan still in MRR form. This is debateable, as it has the terrain following radar thimble fitted to its nose, and the two white blade aerials on the upper surface of the nose appear to be missing. XJ823 transferred to 35 Squadron before it was retired, so it is likely that the aircraft was converted at least partially back to B.2 status.

The sole remaining flying Vulcan XH558 was converted to MRR status and joined 27 Squadron on 17 September 1974 as the fourth MRR. It still flies, as a testament to the Vulcan’s MRR role as well as its bombing and tanker roles as XH558 performed all three duties during its RAF service.

Help Vulcan XH558 return to the sky for another brilliant display season – http://www.vulcantothesky.org/

One response to “When God of Thunder became Mighty Hunter”