What’s a Hawker Typhoon doing on the Naval Air History site? Hawker’s awesome fighter-bomber has more in common with the subject of this blog than you might think…

To support the return of this important aircraft to the skies, which will surely be an astounding sight and sound, please visit the project’s website at https://hawkertyphoon.com and support their crowdfunding scheme (which has just one day left to run as of 26 April 2019)

First of all, the Typhoon was the first in the line of stressed-skin fighters conceived by Sydney Camm that evolved directly into the ultimate piston-engined carrier fighter the Sea Fury (via the Tempest – the rear fuselage of the Typhoon has a great deal in common with that of the Sea Fury); second, the fact that plans were drawn up for a carrier-capable Typhoon as a rival to the Blackburn Firebrand in the naval strike role; and finally, and most pertinently, that one of the Typhoon’s most important tasks in the latter years of the Second World War was anti-shipping strike in the English Channel and along the coast of France, Belgium and the Netherlands. ‘Roadstead’ missions, as they were known, were an important part of the RAF’s offensive activities, especially in the build-up to Operation ‘Overlord’, and the Typhoon was a perfect platform with its four 20mm cannon and excellent low-level performance.

A good example of this kind of mission can be seen in 609 Squadron RAuxAF’s activities on 4 April 1943. As stated in the squadron’s Operations Records Book:

A busy day, starting at 08:30 (DBST) with a shipping strike, 9 Typhoons of 609 escorting 8 Whirlibombers from Le Touquet to Boulogne, 2 Typhoons returning early with engine trouble and 1 Whirlwind ditching through hitting the water by mistake (pilot OK).

Later on there is Ramrod 46, 9 Typhoons again escorting 8 Whirlibombers for an attack on Abbeville marshalling yards… Half way across the Channel 609 are vectored by Swingate to a ‘special target’, and off Boulogne several R-Boats and a small motor Flak ship are sighted. S/Ldr Beamont manoeuvres his formation (2 Typhoons have returned with the Whirlwinds) to attack from up-sun and astern, and this evidently achieves surprise, for the vessels do not open fire until after the leader’s attack. It is then intense, from the 2 R-Boats attacked and from the Flak ship. The CO instructs each pilot to make one attack only, and he himself, followed by 4 others, attacks the last pair of R-Boats, F/Lt Wells and F/O Evans the Flak ship. This and the nearer R-Boat are set on fire, and the second R-Boat is also Damaged. Adjutant Pilot Blanco has part of his rudder shot away, but lands safely. Bandits are then reported by Hornchurch, and the West Riding Squadron returns home, landing at 19:40.

I was lucky enough to be shown round the Typhoon project just before the aircraft was due to begin the restoration process, for which many thanks to Matt Bone. The following photographs show the impressive original Typhoon material the project has collected, centred around the rear fuselage of RB396, which force-landed in the Netherlands in 1945. It is believed that up to 80% of the internal structure of this section could be useable for the restoration to flight, meaning a significant amount of RB396’s original material will be incorporated into the flying Typhoon – this is no mere ‘data plate’ restoration. Other ‘bits and pieces’ I saw on my visit included main undercarriage doors, wheels and tyres, sections of wing spar, the characteristic ‘chin’ radiator fairing, and most importantly, a complete and undamaged Napier Sabre IIA engine. The photos below were taken on my Voigtlander Bessa T rangefinder camera with on Kentmere 100 black and white film – as close as possible to 1940s technology to capture 1940s technology! 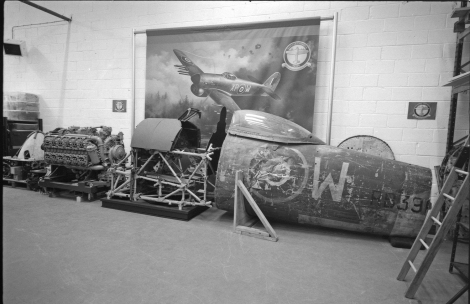 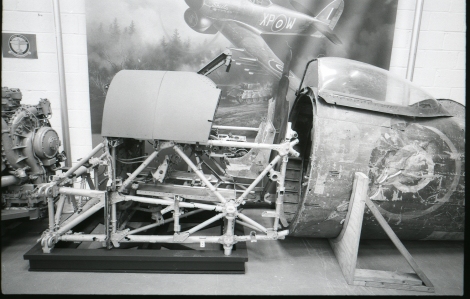 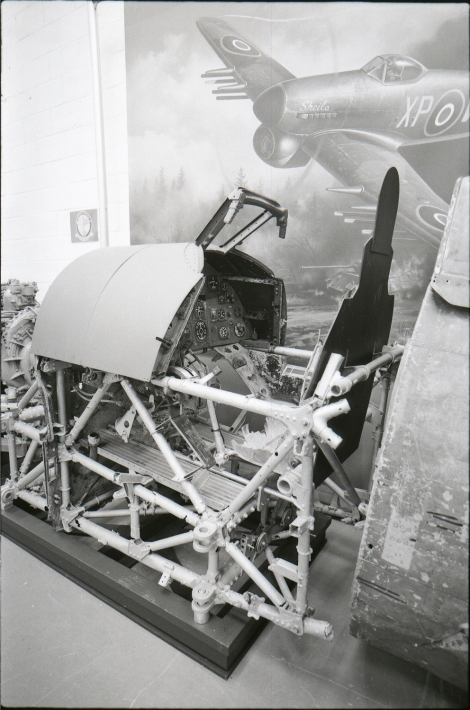 The cockpit – this section is from an early ‘car door’ Typhoon, demonstrated by the hinge recess in the upper deck skin 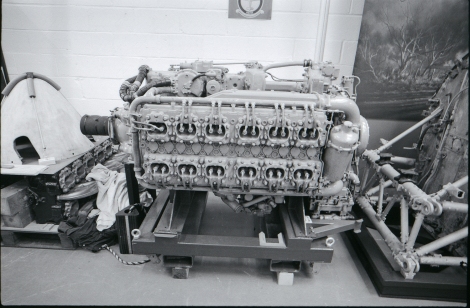 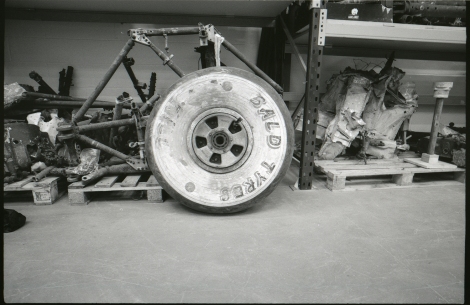 A small selection of the Typhoon parts the project has assembled, including a wheel and tyre (used as an advertising hoarding)