The Aviation Historian launched without fanfare in October 2012. This was a far quieter start than was deserved by a publication that is quite unique in the ranks of aviation periodicals.

The quarterly magazine has reached its third issue, and is going from strength to strength. Naval Air History shall therefore provide a brief review of this edition, naturally with special focus on the articles relating to naval aviation.

The relatively quiet way in which the publication slipped onto the market is typical of the modest approach taken by the editors. There is no bombast or self-congratulation, though if the letters page is anything to go by, readers are responding very well to the mix of topics and the high-quality journalism. 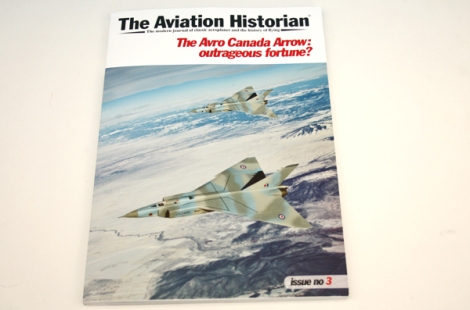 The third issue of The Aviation Historian

The focus of The Aviation Historian is, quite simply, aviation history. No space is devoted to the warbird, restoration and classic aviation industries which really represent a new chapter in the lives of old machines. The publication’s editors, Mick Oakey and Nick Stroud (formerly of The Aeroplane) have chosen to take an exclusively serious approach to this subject. Each issue’s content has covered a range of lesser known and more complex subjects that are invariably fascinating. The reader need not expect to find well-trodden and lightly-researched stories of Spitfires and Mustangs.

The two features relating to naval aviation in the latest issue are a case in point. The first, Codename Highball and Me, relates the recollections of a Royal Marine during the highly secret testing of the Highball anti-ship weapon. This variation on the Barnes Wallis ‘bouncing bomb’ was developed to attack heavily-protected targets such as the battleship Tirpitz. William Hiscock’s memories of the testing of the bomb against the cruiser HMS Hawkins provide a fascinating insight into the trials and experimentation of this still-mysterious weapon which was never used in anger. If the article is anything to go by, it could have proved a great success.

William Hiscock recalls training with the Highball bouncing bomb in 1944

The second feature involving naval aviation, Broken Arrow, is a more involved piece of investigative journalism which is all too rare in the pages of aviation magazines. The feature explores the bizarre accident in 1965 in which an A-4E Skyhawk, with B43 nuclear bomb attached, fell into the sea off the coast of Japan. The A-4E, part of USS Ticonderoga’s air group, rolled off a lift during an exercise involving live nuclear weapons, with the loss of pilot Douglas Webster. The circumstances of the accident have never been properly explained, and it was not until a decade and a half after the accident took place that its proximity to the coast of Japan was revealed.

The piece by Jim Winchester reveals previously unpublished details and evidence of a deliberate cover-up.

In addition to these pieces on naval aviation, the content of the issue ranges in date from 1912 to 1998, and covers everything from the development of the Scout class of aeroplane to the manned space programme. There is truly something for every aviation enthusiast, and the features are invariably as readable as they are scholarly. This issue is thoroughly recommended, and with the standard set so high, The Aviation Historian is well worth any student of aviation’s time and pocket money.

The Aviation Historian’s website can be found at http://theaviationhistorian.com/

One response to “The Aviation Historian – Issue 3 review”